FILMS FROM THE CO-OPS PART 2: MELBOURNE

This program presents key works made by filmmakers associated with the Melbourne Filmmakers’ Co-operative in the 1970s, touching on an alternative history of filmmaking, distribution and exhibition across this rich period and covering films of political activism, social protest, personal expression, satire, sexual liberation, queer identity and technological and cultural change (it follows a program devoted to Sydney’s Co-op screened in 2015).

Although Melbourne’s Co-op was short-lived, beginning in 1970 and ceasing operation in 1977 after the withdrawal of the Australian Film Commission’s funding support, it was a culturally and socially significant entity that supported the city’s burgeoning independent film culture and drew on the work of a range of significant filmmakers, cultural commentators, curators, actors and technicians. These included seminal figures such as documentarian Peter Tammer, film essayist and historian John Hughes, soon to be celebrated feature director Phillip Noyce, acclaimed photographer Sue Ford, film theorist and academic Barbara Creed, groundbreaking Aboriginal director Bruce McGuiness, radical provocateur Ivan Gaal, comic actor Max Gillies, and a stellar array of international figures such as Emile de Antonio.

This program is co-curated by John Hughes and Adrian Danks. 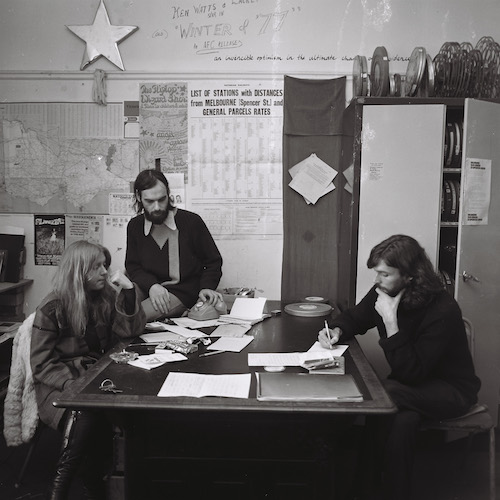 A selection of four short works screened at the Melbourne Filmmaker’s Co-Op reflecting the political, social, cultural and sexual preoccupations and affiliations of the organisation. The program begins with Barbara Creed’s Homosexuality; A Film for Discussion (1975), a groundbreaking work dispelling myths about homosexuality and featuring candid testimony from homosexual men and women as well as their parents. It also includes photographer Sue Ford’s Woman in a House (1972), an impressionistic study of a young married woman isolated in her Melbourne home; Ivan Gaal’s lampoon of TV as a brainwashing medium featuring Max Gillies, Applause Please (1974); and Flux (1970), Peter Tammer’s personal diary film contrasting the comfortable suburban life of his family to that of his father-in-law, an Austrian Jew who emigrated to Australia after World War II.

Screening to be introduced by Professor Barbara Creed.

With bold colour, harsh sound and heavy blows, Buesst’s film is a raw and fascinating insight into the ethics and aesthetics of low-budget 1970s Melbourne filmmaking. A young Aboriginal fighter, played by trained boxer Michael Karpaney, is torn between his career, his mates and the demands of a group of students campaigning for Aboriginal rights. Featuring uniformly fine performances, the film’s greatest asset is its unflinching and unsentimental gaze on the difficulties a blackfella must face in Australian society.

Time Changes Sue Ford (1978) 25 mins. Ford’s bracingly intimate and reflexive documentary on time and change was filmed over four years and focuses on a small group of male filmmakers and close friends.