Tough as nails as an actress, Ida Lupino (1918–1995) exudes a searing tenacity and an unmistakable sense of compassion.

While she had a unique, luminous presence on screen, Lupino enjoyed more satisfaction while directing. After a terrific early career in England and the US, including key roles in such significant films as High Sierra, The Sea Wolf, The Hard Way and The Man I Love, she battled through restrictive barriers to form her own production company, The Filmakers, and contributed to a string of important films during the 1950s before working extensively as a director in television. Her influence as a trailblazer lasted long afterwards. Often shooting in exterior locations, Lupino showed considerable skill in portraying American urban and rural landscapes as beautiful wastelands. Her films were often about women in turmoil, but also spread the net wider to consider social problems with an understanding of societal structures that inhibit the behaviours of and paths for women. While also an A-list actor, screenwriter (including for several of her own features and Don Siegel’s Private Hell 36, in which she also starred) and musician, Lupino was notably only the second woman admitted into the Directors Guild of America, after Dorothy Arzner.

Following the collapse of her production company, Lupino migrated to the small screen, where she maintained her artistic success as an actor and, more prominently, preserved her distinctive directorial sensibility. This season features selections from all of these artistic pursuits and mediums – with a particular focus on the groundbreaking features Lupino completed in the early 1950s (the four films from Outrage to The Bigamist) – to offer a multifaceted portrait of one of the most important figures in American film history. 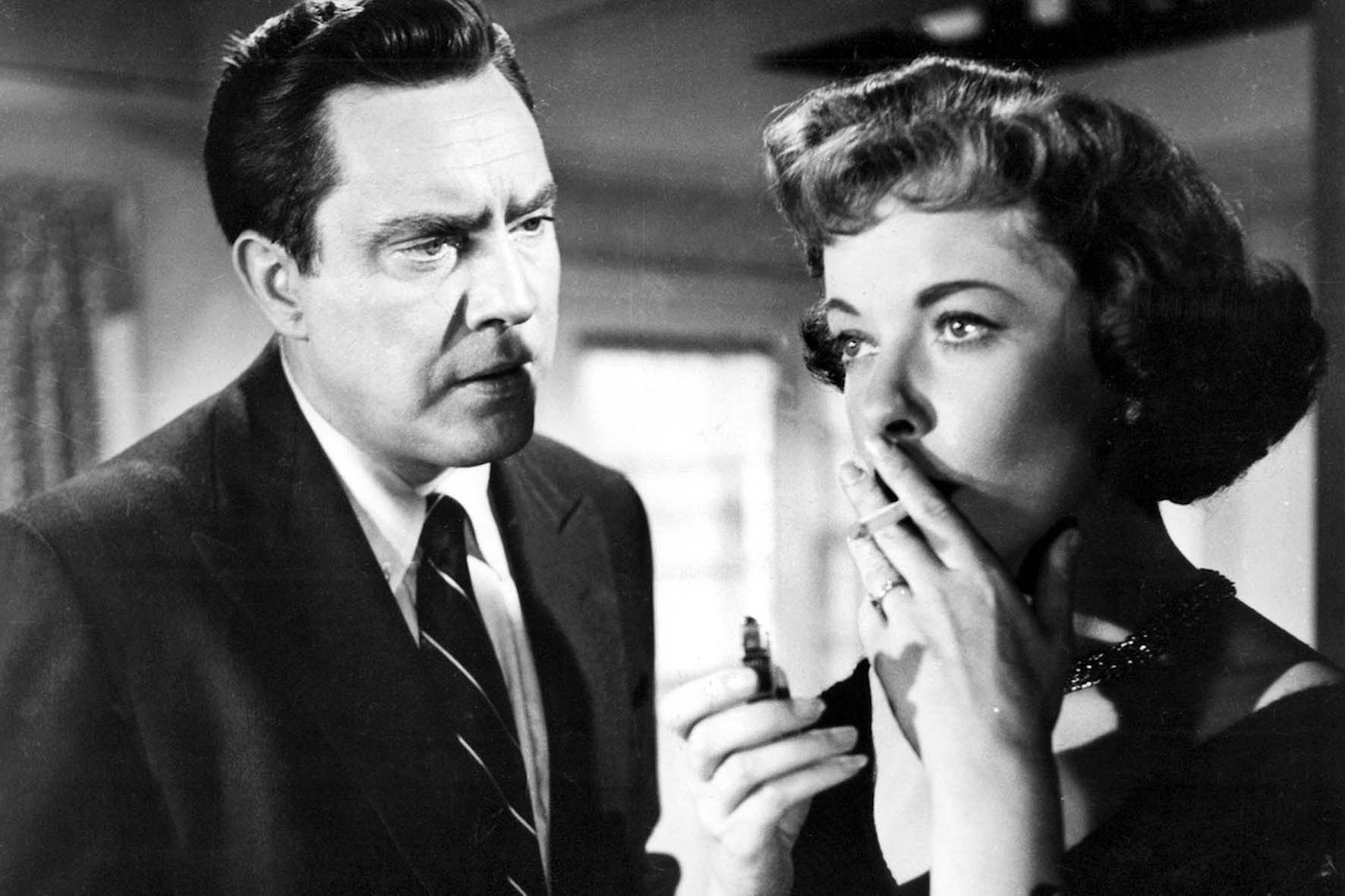 This tale of masculinity under threat from itself is one of the great late noirs of the classic period. Against a stunning Californian desert backdrop, a serial killer traps two men (Edmond O’Brien and Frank Lovejoy) en route to a fishing trip. With exquisitely calibrated tension, Lupino’s masterly control of a predominantly male cast prefigures Kathryn Bigelow’s genre innovations by over three decades. Gorgeously shot by noir-VIP Nicholas Musuraca (Out of the Past), and co-written by Lupino and ex-husband Collier Young, it contains a chilling performance by William Talman as the sadistic killer of the title.

This noir-ish melodrama was Lupino’s fifth feature and, in many ways, her signature work. Told in flashback, it tells the story of a man (Edmond O’Brien) who has been leading a double life torn between his infertile first wife (Joan Fontaine) and the waitress he makes pregnant (Lupino). A key instance of the “social issue” movie, Lupino tackles a then taboo subject in a strikingly low-key, sombre manner. Although critical of male systems of power, and examining the hypocrisies of marriage and social standards in the 1950s, this haunting suburban drama provides a sad portrait of quiet lives left bereft by circumstance.

CTEQ ANNOTATION:
‘A Man Under Investigation: The Bigamist’ by Joanna Di Mattia.

By 1962, Lupino had amassed over 30 credits directing various TV shows – including two episodes of Alfred Hitchcock Presents – and would go on to direct dozens more throughout the 1960s before concluding her directorial career. During this incredibly fertile period, Lupino managed to secure directing credits on nine episodes of the relatively short-lived (1960–62) Boris Karloff-hosted anthology series, Thriller. This, the highly atmospheric penultimate Lupino-directed episode, is set in an unnamed Latin-American country, and tells the story of a woman (Mala Powers) who fakes her death to avoid an arranged marriage to a sadistic colonel. 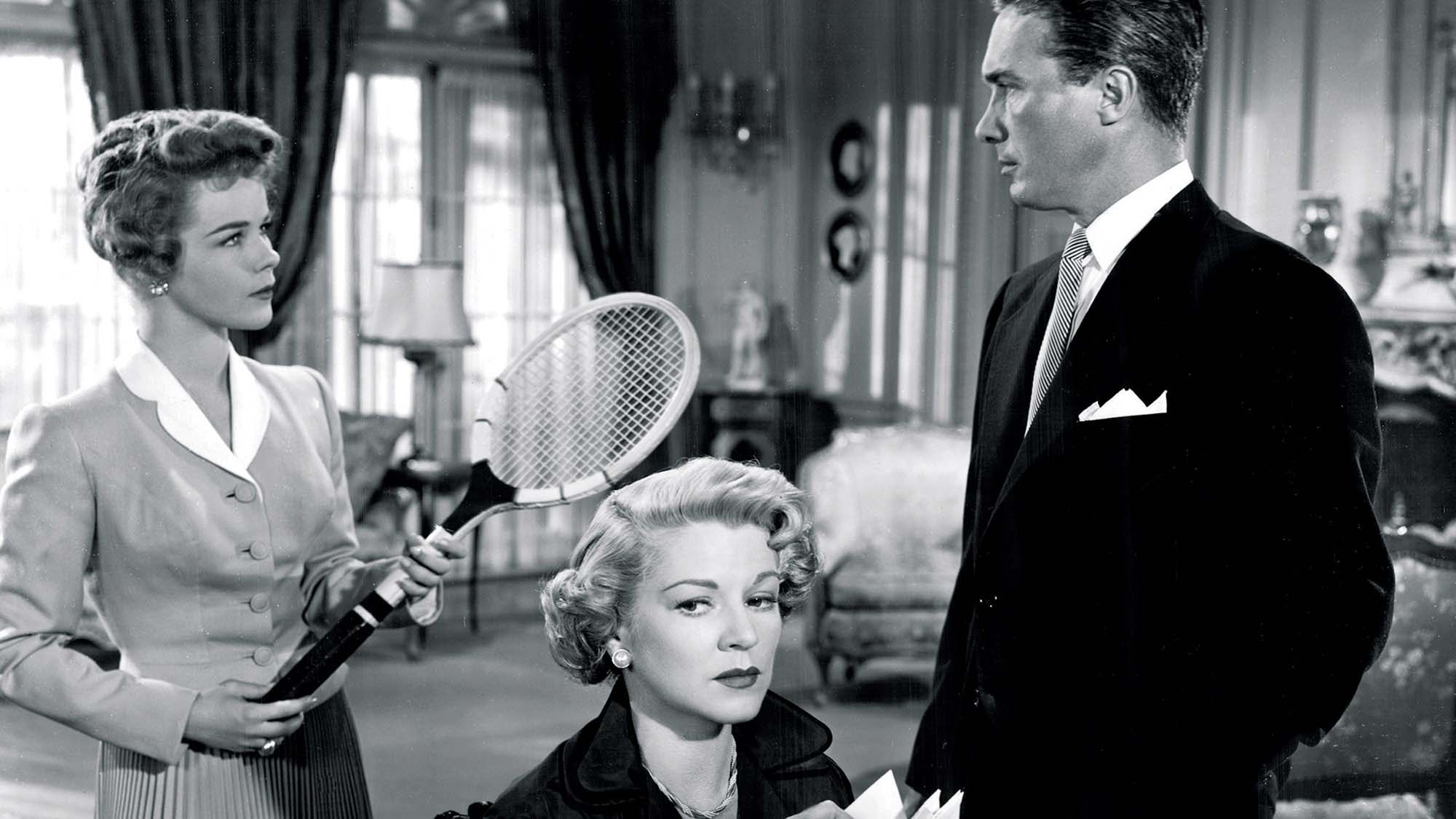 Made at a time when it was virtually impossible to even mention the word “rape” in a Hollywood movie, director and co-writer Lupino’s second feature turns this limitation into the film’s razor’s edge. As society denies the protagonist’s (Mala Powers) overwhelming distress, it instead tries to impress upon her the need to return to normalcy and the comfort of the “white-picket-fence” promises of marriage. This searing condemnation of patriarchal complicity, “victim blaming” and rape culture is a remarkably frank, tense and personal portrait of the psychological effects of institutionalised sexual violence.

This key work in Lupino’s directorial career, shot on a low budget over 30 days, follows a young, talented tennis player (Sally Forrest) who is beaten down by her domineering mother (Claire Trevor). Not the typical tale that ultimately vilifies an ambitious mother, Lupino shows real understanding of a woman’s painful path towards independence and success. The film resists saccharine resolution and succeeds in expressing its sympathies to both male and female perspectives. Trevor’s experience in the role of a hardened, world-weary woman is central to the film’s emotional intensity.

This memorable episode of the iconic TV series (scripted by the show’s creator Rod Serling and holding more than a passing resemblance to Poe’s The Masque of the Red Death) sees Robert Keith as a dying millionaire doling out justice to his grasping relatives during an ominous Mardi Gras in New Orleans. In one of her more emotionally charged TV assignments, Lupino’s characteristic focus on the human rather than the macabre ironically renders the bizarre finale that much more affecting.

CTEQ ANNOTATION:
The Twilight Zone: ‘The Masks’ by Ben Kooyman. 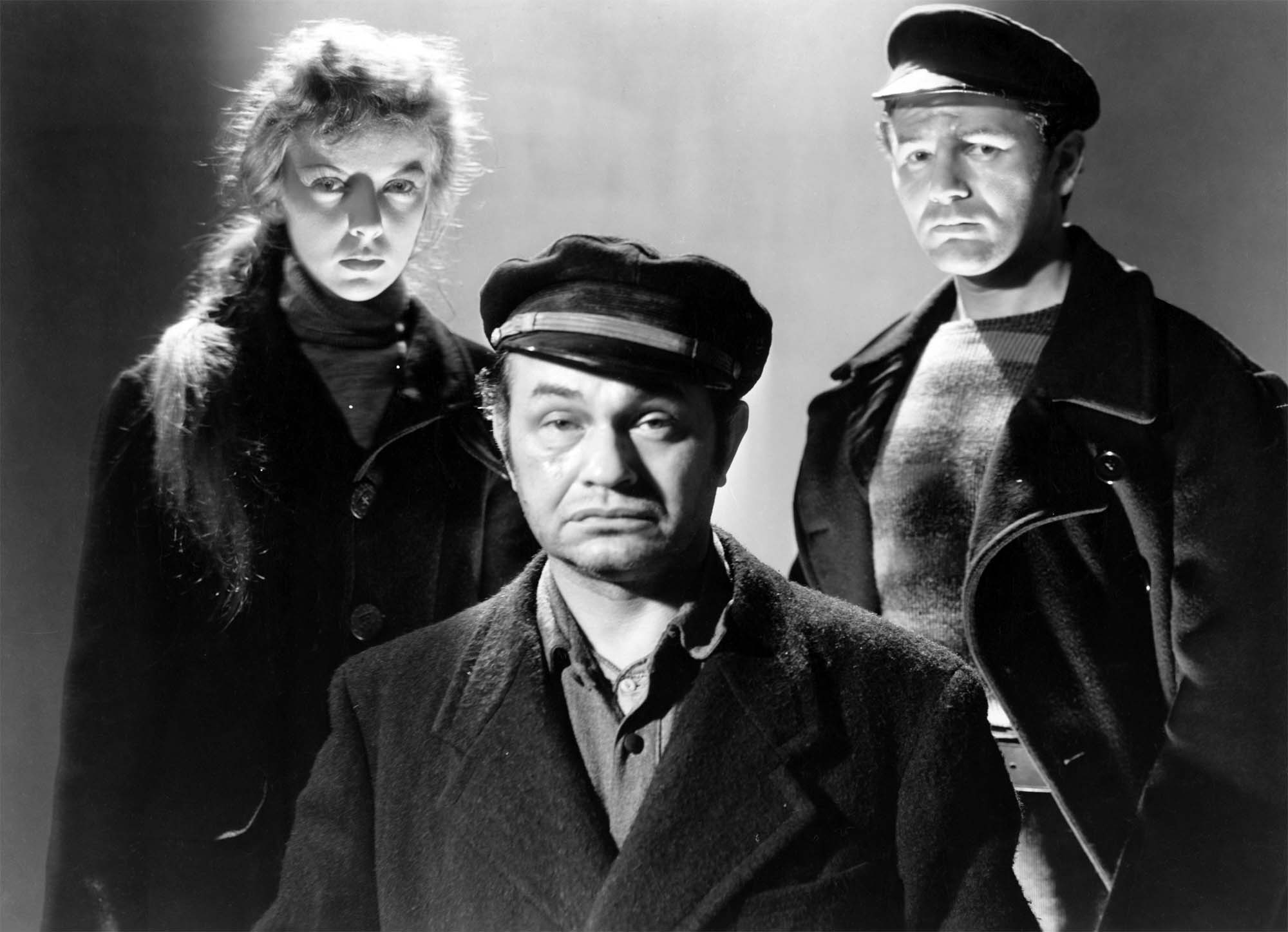 Recently restored to its original length, Curtiz’s highly atmospheric adaptation of Jack London’s psychological adventure novel is “a triumph of studio filmmaking” (J. Hoberman) focusing on a sadistic ship’s captain (Edward G. Robinson), who runs his vessel like a concentration camp, up against a United Nations of “fellow” travellers – an accidental passenger (Alexander Knox), a rebellious seaman and a prison fugitive (a wonderfully hardboiled Lupino) – trying to escape. This moody anti-fascist parable features contributions by many key figures of the Hollywood Blacklist including writer Robert Rossen and co-star John Garfield.

Lupino’s taut screenplay (with Collier Young) for Siegel’s bold and muscular policier reveals her as an acute observer of masculine codes of violence and a progenitor of the likes of Kathryn Bigelow. Steve Cochran and Howard Duff star as cops who find themselves first chasing, then fatalistically tempted by, a $300,000 robbery haul before becoming entangled with Lupino’s tough-as-nails nightclub singer. Lupino depicts a noir-inflected world where no one goes unpunished and easy temptation only begets degradation and betrayal. With Dean Jagger and Dorothy Malone. 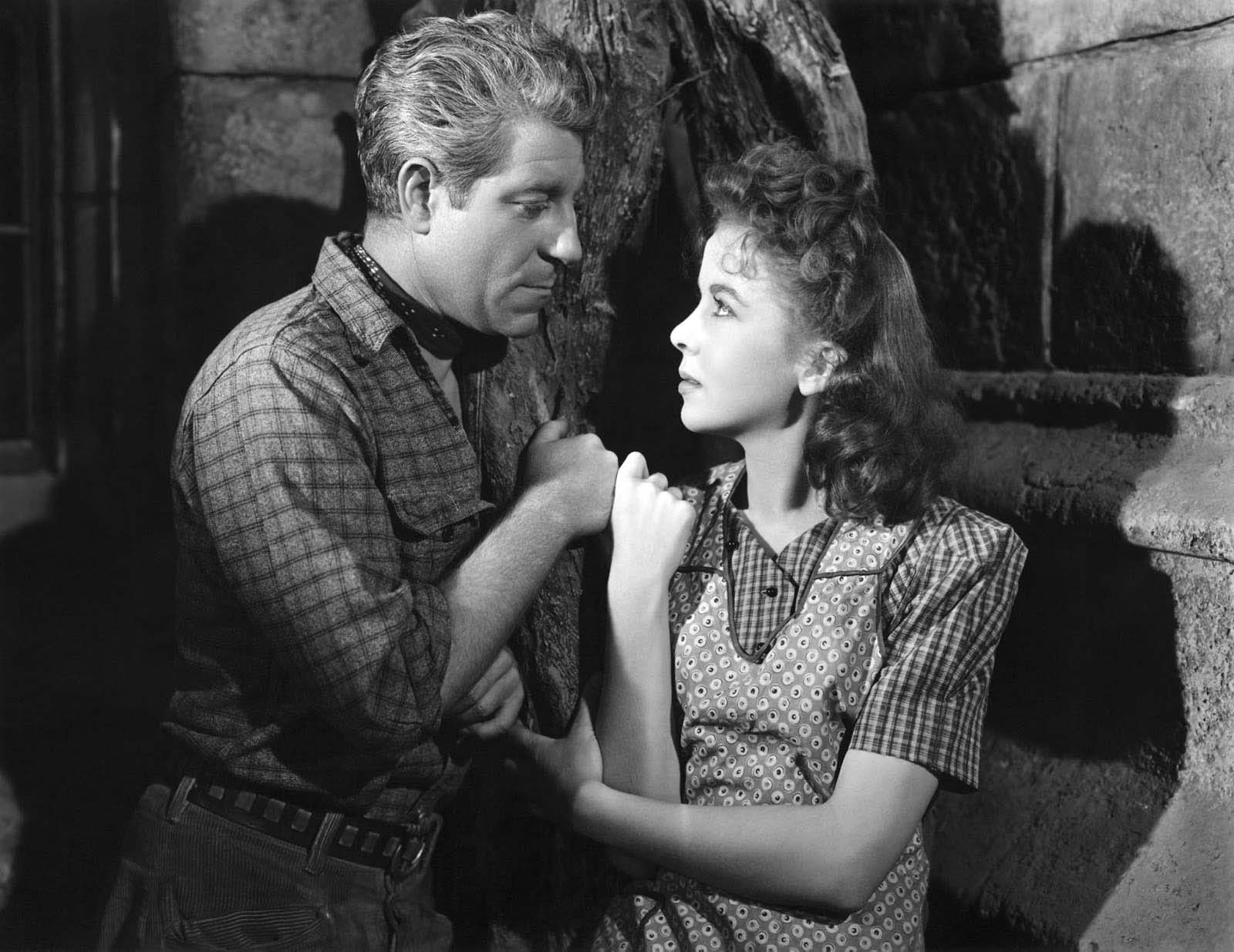 This fascinating and highly atmospheric “missing link” between French poetic realism and American film noir features Jean Gabin as a drunken dockworker who fears he has committed murder and hides out on a barge where he witnesses the attempted suicide of a young woman (Lupino). Gabin and Lupino provide a truly distinctive coupling in this strange, doom-laden and often-existential psychological drama containing many fascinating associations: Fritz Lang directed a number of its initial scenes; Salvador Dali worked on the subjective “drunk” sequences; John O’Hara wrote the script. With Claude Rains and Thomas Mitchell.

Peckinpah’s modern-day cattle-punching western is a surprisingly gentle and autumnal portrait of an ageing and itinerant rodeo star (Steve McQueen) returning home to small-town Arizona to compete in its annual contest. This warmly astute and leisurely comedy-drama was the director’s surprising follow-up to the incendiary Straw Dogs, and features Lupino in the majestic role of the family’s neglected matriarch who provides a bedrock for her affectless husband (Robert Preston) and progeny. Exquisitely shot by Peckinpah’s frequent collaborator, Lucien Ballard, it co-stars Ben Johnson and Joe Don Baker.